2014: Highlights from A Fabulous Year Part I

2014 has been such a roller coaster ride and my best year ever!  I have met so many people who have made me a better Mom, friend, daughter, sister, wife and Interior Designer.  By having the privilege of entering others’ homes, their personal space and the place they love so dearly, a relationship is born that changes me, educates me, and inspires me.

One of my favorite projects was a Master bathroom remodel on the third story of a condo in Green Hills.  The client had moved here from Chicago and was absolutely delightful.  She has traveled the world and brought back items that touched her and became a part of her home.  As you walk through her condo, each piece you lay your eyes on has a story, a depth, a character that describes who she was and what she loved. 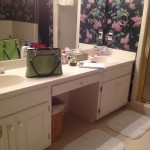 Before vanity and shower on right 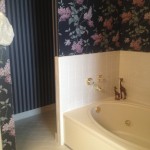 Before wallpaper, bathtub and toilet behind wall 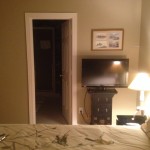 We tore out everything! It was amazing seeing the creativity of the contractor in setting up a pulley system to get everything out the third story window and into a dumpster. 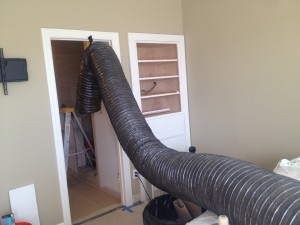 The client wanted no tub and a large shower with a bench plus lots of storage.  We took out existing shower and took down the wall separating the toilet from the rest of the space.  Once we had the space totally opened up, we were able to add a nice size vanity with lots of storage.  He other request was a clean, modern palette and simple lines using whites and creams.

And the finished Space:

One of the great features of this shower is that the other side of that half wall has the shower controls so you can turn it on and get it the right temperature without even getting wet! The hook right outside the shower is also very helpful to hold a towel. 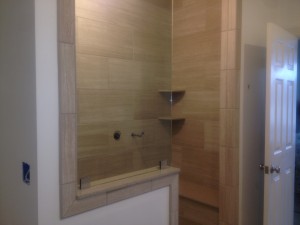 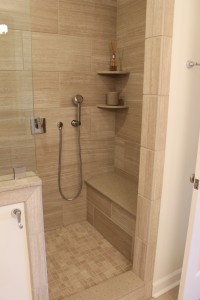 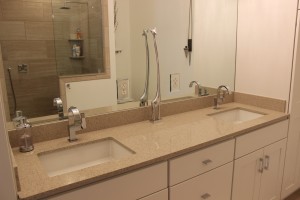 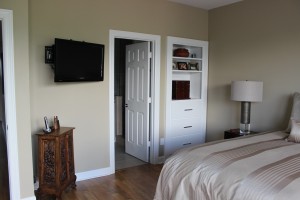 Another thing we did was build in drawers and cabinetry in the bedroom, backing into where the bathroom closet was previously.  We also moved the TV to the other side of the door and mounted it on the wall for better viewing from anywhere in the room.

Another feature is a second handheld shower handle and bench. 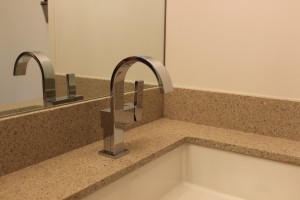 The faucets were chosen because of their simple, modern look as well as smooth touch.  The client loved the hardware, and the small knobs fit perfectly in her hands…it’s the little things that matter so much! 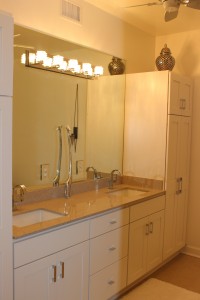